skip to main | skip to sidebar

My winter running experience has been much different this year, due to both my new location, Jackson, Michigan, and to the weather, which has been both colder and snowier. Last winter I lived in Ann Arbor, where the city does a very good job of keeping the sidewalks clear, and where my main winter running route was up around the hospital, which was always kept clear.

Here in Jackson, my main paved running route, the Falling Waters Trail, is kept plowed, but not obsessively so, and the temps these past few months have remained down below freezing mostly, unlike last winter. Result: though 'cleared' it always has a layer of snow/ice. And, despite my bravery/madness of last year in running barefoot all the time, I have not been able to duplicate the experience this year. I found myself able to run barefoot only if/when the sidewalks/roads were basically clear of most ice/snow, and even then only for a half-hour mostly, in temps anywhere from the upper-twenties up. I fond the pads on my feet were thick enough to protect me from the cold pavement for short periods of time, but if I had to run through snow/slush/ice, then my tolerance went way down.

With a layer of snow/slush/ice being standard here in Jackson, I had to admit that, as they say in French, 'il y a des limites', and to go with minimalist running instead of full-on bare. Which hasn't been the worst thing to happen to me, the only bad point being that my soles have lost their really thick calluses, though not completely, as I continue to go barefoot at home and sometimes at work (don't tell my supervisor!).

In fact, the advantage of going minimalist means that I've been able to run for longer periods of time. Instead of the daily (sometimes twice daily) half-hour runs of last winter, I have been able to have longer runs of an hour, and even two hours if the weather is at all up around freezing.

My minimalist footwear is not the best. If I were smart, and generous to myself, I might have experimented with buying something suitable for cold weather. As is, what I used were either my regular VFF KSOs, or my Minnetonka moccasins.

My KSOs are only really comfortable with temps in the upper-20s and higher, and that's including wearing a pair of Injinji socks with them. The KSOs simply do not hold heat at all, and really only offer a protective layer between my feet and the icy/snowy/ ground. I can only every really use them when I know the roads/paved trails have been cleared. If there is even an inch of fresh snow, it tends to collect on the top of my KSOs, especially around the toes, and either melt, or stay there radiating cold. Also, the separate toe sockets are horrible for holding heat. I like the visual effect of freaking people out with them, but I've yet to find a real practical application for the separate toes.

My big experiment, which I talked about in my previous post, is with my Minnetonka moccasins. I'd bought them the year before simply to walk in, but when this winter proved super cold, especially around early December, I needed something to cover up the feets. The soles are a double layer of soft leather, and had started to wear through, which allowed me to decide that even if I screwed them up badly, there was no big loss. What I found though, was that they work very well, especially for the colder, sub-20s, temps, since one, I can wear socks with them, and two, my toes aren't separated like with the KSOs, and three, the leather actually holds heat well. I found that not only can I run with them on roads and the Falling Waters paved trail, but that I can go onto the trails in the park, through the snow. Even if I get snow in them, my feet stay fairly warm. The soles have gotten a lot more wear, and may not last much longer, but overall they've given me more freedom to maintain some trail running. Price-wise they're less than all the minimalist shoes I've seen, and though they may not last as long, they will at least last me this on Winter, in addition to having been worn for a year and a half before for walking. I also love that there are no laces involved, just slip them on and go.

So, I feel that, though I haven't been running barefoot, I have been running more overall in minimalist mode, keeping me more in shape than last winter.

There were a glorious few days at the end of December when the temps got above freezing and most of the snow melted away, and I immediately started running barefoot again. Unfortunately, since my calluses were thinner, I overdid it a bit, and ran my feet raw. But soon the temps plunged and I was back to minimalist. I still feel that when I run minimalist that my feet 'strike' a little harder, even though I now use the lifting technique, and running through the snow, though fun, I find myself switching to the old 'pushing off' method, mainly because of lack of traction.

And so far the cold and snow continues. I run less, and that's ok, giving me time for other things, like writing and playing music, and perhaps some time to let my body recover a bit from more extreme running of last summer, though with one of my goals for this coming summer being to run a 100 miler, I worry about losing my edge. But, that's life here in Michigan!
Posted by John Yohe at 1:00 PM 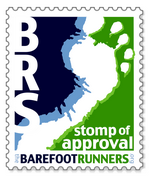 Other running blogs and sites